1.3.1 is a bugfix release, primarily dealing with improved setup and handling of dependencies, and correcting and enhancing the documentation.

To give your plots a sense of authority that they may be missing, Michael Droettboom (inspired by the work of many others in PR #1329) has added an xkcd-style sketch plotting mode. To use it, simply call matplotlib.pyplot.xkcd before creating your plot. For really fine control, it is also possible to modify each artist's sketch parameters individually with matplotlib.artist.Artist.set_sketch_params().

As part of this feature, there is a new EventCollection class that allows for plotting and manipulating rows or columns of identical line segments.

Geoffroy Billotey and Ian Thomas added classes to perform interpolation within triangular grids: (LinearTriInterpolator and CubicTriInterpolator) and a utility class to find the triangles in which points lie (TrapezoidMapTriFinder). A helper class to perform mesh refinement and smooth contouring was also added (UniformTriRefiner). Finally, a class implementing some basic tools for triangular mesh improvement was added (TriAnalyzer).

Till Stensitzki added non-zero baselines to stackplot(). They may be symmetric or weighted.

Paul Hobson provided a fix to the boxplot() method that prevent whiskers from being drawn inside the box for oddly distributed data sets.

A call to subplot() without any arguments now acts the same as subplot(111) or subplot(1, 1, 1) -- it creates one axes for the whole figure. This was already the behavior for both axes() and subplots(), and now this consistency is shared with subplot().

Wes Campaigne modified how Patch objects are drawn such that (for backends supporting transparency) you can set different alpha values for faces and edges, by specifying their colors in RGBA format. Note that if you set the alpha attribute for the patch object (e.g. using set_alpha() or the alpha keyword argument), that value will override the alpha components set in both the face and edge colors.

Easier creation of colormap and normalizer for levels with colors#

Phil Elson added the matplotlib.colors.from_levels_and_colors() function to easily create a colormap and normalizer for representation of discrete colors for plot types such as matplotlib.pyplot.pcolormesh(), with a similar interface to that of matplotlib.pyplot.contourf.

Full control of the background color#

Wes Campaigne and Phil Elson fixed the Agg backend such that PNGs are now saved with the correct background color when fig.patch.get_alpha() is not 1.

Passing bbox_inches="tight" through to pyplot.savefig now takes into account all artists on a figure - this was previously not the case and led to several corner cases which did not function as expected.

Damon McDougall extended the Rectangle constructor to accept an angle kwarg, specifying the rotation of a rectangle in degrees.

The SVG and pgf backends are now able to save text alignment information to their output formats. This allows to edit text elements in saved figures, using Inkscape for example, while preserving their intended position. For SVG please note that you'll have to disable the default text-to-path conversion (mpl.rc('svg', fonttype='none')).

The vertical alignment of text is now consistent across backends. You may see small differences in text placement, particularly with rotated text.

Multi-line text will now leave enough room for the height of very tall or very low text, such as superscripts and subscripts.

Left and right side axes titles#

Andrew Dawson added the ability to add axes titles flush with the left and right sides of the top of the axes using a new keyword argument loc to title().

Brian Mattern modified the manual contour plot label positioning code to interpolate along line segments and find the actual closest point on a contour to the requested position. Previously, the closest path vertex was used, which, in the case of straight contours was sometimes quite distant from the requested location. Much more precise label positioning is now possible.

Phil Elson made it easier to search for rcParameters by passing a valid regular expression to matplotlib.RcParams.find_all(). matplotlib.RcParams now also has a pretty repr and str representation so that search results are printed prettily:

The font.* rcParams now affect only text objects created after the rcParam has been set, and will not retroactively affect already existing text objects. This brings their behavior in line with most other rcParams.

rcParam value rcParams["savefig.jpeg_quality"] was added so that the user can configure the default quality used when a figure is written as a JPEG. The default quality is 95; previously, the default quality was 75. This change minimizes the artifacting inherent in JPEG images, particularly with images that have sharp changes in color as plots often do.

Michael Droettboom, Phil Elson and others have developed a new backend, WebAgg, to display figures in a web browser. It works with animations as well as being fully interactive. 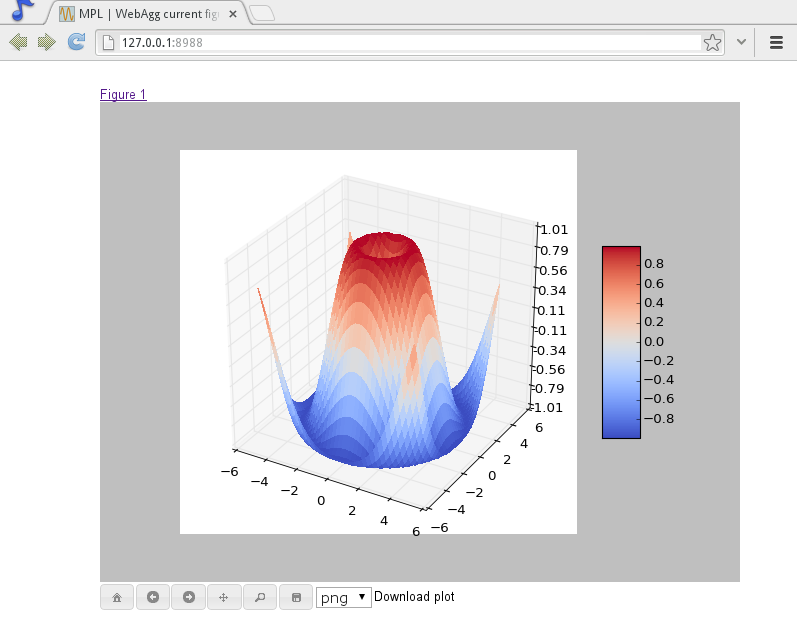 Future versions of matplotlib will integrate this backend with the IPython notebook for a fully web browser based plotting frontend.

Martin Spacek made the save figure dialog remember the last directory saved to. The default is configurable with the new rcParams["savefig.directory"] (default: '~') rcParam in matplotlibrc.

Tony Yu has begun work reorganizing the examples into more meaningful categories. The new gallery page is the fruit of this ongoing work. See MEP12 for more information.

For the sake of brevity and clarity, most of the examples now use the newer subplots(), which creates a figure and one (or multiple) axes object(s) in one call. The old way involved a call to figure(), followed by one (or multiple) subplot() calls.

A number of features that were deprecated in 1.2 or earlier, or have not been in a working state for a long time have been removed. Highlights include removing the Qt version 3 backends, and the FltkAgg and Emf backends. See API Changes in 1.3.x for a complete list.

matplotlib 1.3 includes an entirely rewritten setup script. We now ship fewer dependencies with the tarballs and installers themselves. Notably, pytz, dateutil, pyparsing and six are no longer included with matplotlib. You can either install them manually first, or let pip install them as dependencies along with matplotlib. It is now possible to not include certain subcomponents, such as the unit test data, in the install. See setup.cfg.template for more information.

On Linux, matplotlib now uses the XDG base directory specification to find the matplotlibrc configuration file. matplotlibrc should now be kept in ~/.config/matplotlib, rather than ~/.matplotlib. If your configuration is found in the old location, it will still be used, but a warning will be displayed.

Figures created through pyplot.figure are retained until they are explicitly closed. It is therefore common for new users of matplotlib to run out of memory when creating a large series of figures in a loop without closing them.

matplotlib will now display a RuntimeWarning when too many figures have been opened at once. By default, this is displayed for 20 or more figures, but the exact number may be controlled using the figure.max_open_warning rcParam.